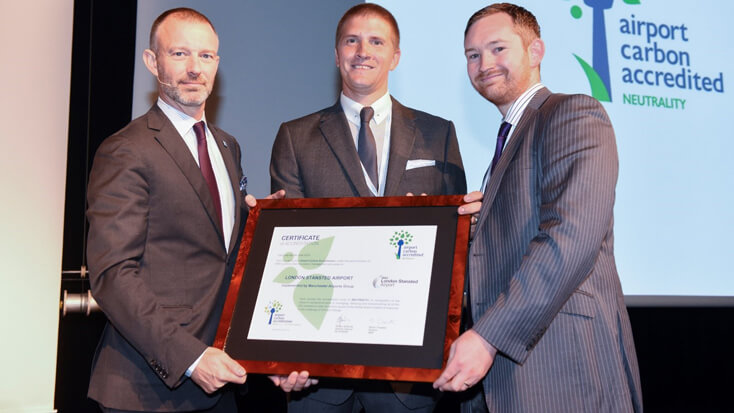 London Stansted has been awarded Level 3+ carbon neutral status by the Airports Council International (ACI), in recognition of its extensive work to reduce and offset carbon emissions at London’s fastest growing airport. The award was formally handed over to Martin Churley, Stansted’s Environment Manager, and Adam Freeman, MAG’s Environment Advisor, at the Airport Carbon Accreditation ceremony at the ACI’s World Annual General Assembly in Brussels. Achieving carbon neutrality means an airport has reduced emissions under its direct control.

A range of energy management measures has been put in place to monitor energy use, supported by a range of efficiency measures. These include the installation of efficient LED lighting, building management systems to optimise operations, the use of free air cooling and staff engagement campaigns. Collectively these initiatives have slashed the airport’s energy demand, with gas use dropping by 19 per cent and electricity consumption by 14 per cent since 2011/12. This is despite Stansted serving an additional 10 million passengers a year during the same period.

To further reduce emissions, London Stansted has sourced all its electricity from renewable sources since April 2013. To compensate for the small amount of remaining and unavoidable emissions, the airport has also purchased verified carbon offsets. Collectively, these initiatives have reduced emissions from the energy and fuel used to operate the terminal, runway and facilities at Stansted Airport from 25,000 tonnes CO2e in 2011/12 to zero in 2016/17.

“At Stansted Airport we are proud and committed to minimising the impacts of our operation on the environment and to working with key partners at the airport to drive positive change. After many years of hard work to reduce the amount of energy we use, we are delighted to be recognised by Airport Carbon Accreditation as carbon neutral, and that our initiatives at Stansted are making a really positive impact. This achievement is especially pleasing as it follows a period of record growth in passenger numbers and at a time when we are the fastest growing London airport. We want to continue growing the airport, offering passengers more choice and convenience and airlines access to the London market through our available runway capacity. But we are committed to doing this in the most sustainable and responsible way. As an organisation, we recognise that climate change is an important global challenge, with aviation contributing around two per cent of international carbon emissions each year. This achievement demonstrates our commitment to ensuring we balance our role as an economic generator, alongside caring for the environment, whilst working with our third parties to reduce the wider impact of our industry.”

“I congratulate London Stansted on becoming carbon neutral. Stansted is a fine example of an ambitious airport that is actively seeking to develop sustainable connectivity for its community – by reducing the emissions under its direct control, working with others on the airport site to do their part and investing in responsible carbon offsets for the remainder of its direct CO2 emissions. And of course, with this news today, it means that all 3 airports in the MAG group are now carbon neutral – a huge achievement for everyone involved in making that happen.”

“We were delighted to be able to use some of the waste produced on site at Stansted Airport to support the #OneLess campaign in a unique way. At Stansted we divert all our waste away from landfill and recycle more than 75 per cent of it, including plastic bottles surrendered by passengers at security which don’t comply with restrictions. But it is vital to support efforts to reduce the popularity of single-use plastics. Only a few weeks ago we gave all 2000 of our MAG staff a reusable hot drinks cup to reduce the number of coffee cups thrown away on site, so this project aligns well with our own efforts to support a reduction in waste.”

“The installation piece was commissioned by ZSL London Zoo as part of the #OneLess campaign to reduce single-use water bottle use. The structure - which took three weeks to prepare in the artist’s studio and another three days to erect on site - will house information about plastic pollution and the small steps everyone can take to help tackle the growing issue. It is formed from 15,000 bottles - the number of single-use bottles bought every minute in the UK. We all need to take more notice of our own actions if we’re going to make any headway in tackling the plastic pollution problem, which is right on our doorstep. Through projects like the #OneLess campaign and our successful Project Ocean partnership with Selfridges, ZSL is helping to reduce the amount of ocean-bound plastic and protect the biodiversity of life beneath the waves – we need to spread this message far and wide, and ZSL’s new Space of Waste is a great way to educate young people about this villain of conservation. Small changes can make a big difference – go #OneLess and ditch those disposable plastic bottles now, by switching to a refillable water bottle.”

“Building this piece with ZSL was a satisfying challenge, as plastic bottles are not usually seen as a building material – recycling them into this structure, which will remain at ZSL London Zoo all summer, was a great way to turn the culprits themselves into a stark visual reminder of the worsening plastic problem in our city.”

London Stansted Airport won a top national award for their support of Essex foodbanks, at the Better Society Awards last night in London. The airport won the ‘Waste Management and Recycling Programme of the Year’ category, thanks to their programme of donating food and toiletries surrendered at airport security to charity.

The donations are generated by passengers who are not complying with security regulations about restricted items in their hand luggage, introduced nearly 12 years ago. From fancy preserves and spreads to tinned fish and cosmetics, a wide variety of potential donations are regularly being left behind.

Although this can be disappointing for those travelling, local Essex families have been benefitting with extra items in their food parcels since 2017. The partnership between London Stansted Airport and local foodbanks has generated up to two tonnes every month of donations from passengers’ surrendered items, directly supporting vulnerable people in the airport’s local communities.

Airport waste management staff, who collect, store and pack the items voluntarily, attended the awards ceremony to receive the prize - Kim Ruskin and Annie Meeten who volunteer and pick up the items in their own time to deliver to the foodbanks and Sergio Magalhaes, whose team from Mitie segregate all the items.

“While it’s a shame some items have to be left behind by passengers misunderstanding the rules, it means we can contribute to the important work of local food banks in providing much-needed food, toiletries and essentials to local families. We’re delighted with how well the past year of this scheme has gone, and it wouldn’t be possible without our staff volunteering to go over and above to help get these items to the food banks. We look forward to continuing to donate as many items as possible in the future.”

A place to sit back, relax and escape the crowds of the airport from £25 per person